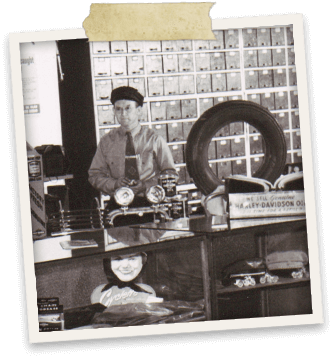 A PATTERSON FAMILY TRADITION SINCE 1949

Henry Patterson purchased Topeka Harley-Davidson® in March of 1949 from Dutch Myers. Henry (Pat) moved his wife, Leola, and their two young boys, Larry and Dennis, along with all of their possessions, in one car and motorcycle trailer from Grand Junction, Colorado to Topeka in order to take over the dealership. Pat endured many hardships in his first few years of business. Within a year of taking over at 305 Kansas Avenue, the Throop Hotel, next to his store, caught fire and collapsed on top of his building and ruined the structure. He was forced to move across the street temporarily before finding a new location at 2410 W 6th on the edge of town. Photograph: Henry Patterson Circa 1950

VOTED #1 BY RIDERS FOR
OVERALL SATISFACTION